Emanuele Convento is a slow and patient worker, his research is not characterised by decorative superficiality but by profound and intense expressive force. His palette and chromatic preferences are not light and vibrant but oriented towards warm tonalities by giving particular attention to contrasts and plastic forms. The compositional simplicity obtained by decisive contraposition of light and dark blobs of colour, achieved through corpulent, quick, synthetic and dense brush strokes, corresponds to the deep desire to make manifest the structural connotations of his expressive language which finds a deep resonance in the Veneto regional pictorial tradition.
As the artist has declared, his intentions are to capture the structure and the backbone of things” with a sense of intimate grandiosity.
This can be seen in works of reduced dimensions where in the compositional planning and in choice of subjects both sacred and profane we find references to past pictorial traditions but with renovated vital rigour.
In the universal drama of the Crucifixion and inconsolable desperation of the Deposition, we find alternating time allegories inspired by Tiepolo where old bearded men with wings and inexorable scythes hover through the air besides young maidens. In the large canvases that maintain executional freshness and spontaneity typical of the sketches,
Convento is inspired by the myth of Venus and Adonis, of the vain attempt of the goddess of love to withhold her beautiful beloved from going hunting and therefore avoiding his tragic destiny. The figures are defined by the painted background that becomes the vital element of form and underlines the different moments of the painting, which is completed and revealed before our eyes in a space full of light, shadows, and colours.
Emanuele is not interested to offer us precise connotations of his subjects but through the use of colour, he wants to express a suggestive plastic and sensual dimension. Living side by side to his more figurative style, we find an abstract research for the informal arising from the desegregation of form.
A research that, with regard to the instinctive gestures translated into dynamic strokes, pays particular attention to the material aspects of colour becoming concretion by coagulating and emerging onto the surface. In his monotypes, Convento accentuates the dramatic temperament of his visions obtained by subtracting and scraping colour until reaching suffused passages with decisive contrasts between light and darkness illuminating the spectral bodies of figures living in obscurity.
The artist works and lives in the contemporary age, he feels the need to look back at the past and reutilise old artistic techniques like tempera emulsion. His work is the consequence of a profound knowledge of painting techniques: each canvas is prepared meticulously in the studio, each colour is created mixing earth with linseed oil, rabbit skin glue is utilised as adhesive, the bottom is chalky. It is a painting that requires long preparation and realization time. It is in these moments that the knowledge of the artist is amplified and deepened, so much so that each painting is the result of new acquired understanding.
The utilization of a new pictorial or etching technique taken from the past does not necessarily imply the adoption of an “old” style. His research obliges him to take on figurative themes (which go from the sacred to the profane, from the vision of reality to the mythological) but this does stop him from confronting himself with the non-figurative, the abstract and a particular inclination towards the material and informal. What brings together his research is the reflection upon the pictorial gesture that gives life to these compositions: an intimate gesture, dynamic, and powerfully expressive.
A decisive gesture that links it the past but tends towards the future and by revealing its strength and freshness allows the artist to realise works that go beyond commercial stereotypes giving testimony to the eternal vitality of art.

My poetic intention has as objective the manifestation of a pictorial gesture that is the structural backbone of a work of art. I wish to represent the skeleton of reality, a structure formed by a gesture deprived of velleity and that goes back to its “archè” that is to say its origin.

The works by Emanuele Convento can be allocated within an a-temporal space in art history. His pictorial style is constructed through very original characteristics full of meaning and is deeply embedded within the pictorial art of the past.
However, he is not copying or explicitly referring to past art but capturing the essence of the same. From previous artistic expressions, Emanuele manages to captivate its emotional charge while filtering it through his own personality. In his artistic journey, there is still a very strong bond with the past thanks to the artistic techniques and processes which – with the use of natural colours, the preparation of pictorial surfaces and their elaboration – follow the pictorial tradition of the highest order using methods and teachings of pictorial means handed down by the giants of the trade. Entering his studio you will breathe the air of past eras: works in progress, sheets of paper, canvases, tables full of phials containing coloured powder.
The latter being nothing but earth and pulverised mineral – already impregnated in all their different shades of artistic value – which all contribute to the transformation of artist’s ideas into something acknowledgeable to everyone coming into contact with this young painter’s art.
The art of Emanuele Convento is the expression – as already outlined – of his soul, of his feeling and seeing things around him as a means of communication and not only as mere decoration.
The characteristics, the expressive essence of Emanuele is the pictorial gesture that time and time again becomes fluid and tense, underlining with strokes of light and jolts of colours which give form to his sentiments and emotions connected to the world and the people by him mostly loved.

In my works I would like to express the concept of “archè” as a primal element. That primal element found in cave art and the simple but efficient forms in Antelami and Wiligelmo, and Afro’s primordial art. Mine is a journey from figurative art to the informal and from the informal to the perception of form, in a circular motion.
What I propose is a systematic work on pictorial gesture investigating both the sedimentation and wear and tear of matter while focusing on the rapid brush strokes typically found in Veneto regional art. It is a gesture wanting to free itself from form – but without forgetting about it – and living as free sound. It is a gesture wanting to be fresh like the water in a stream, but incarnated in the memory of history. 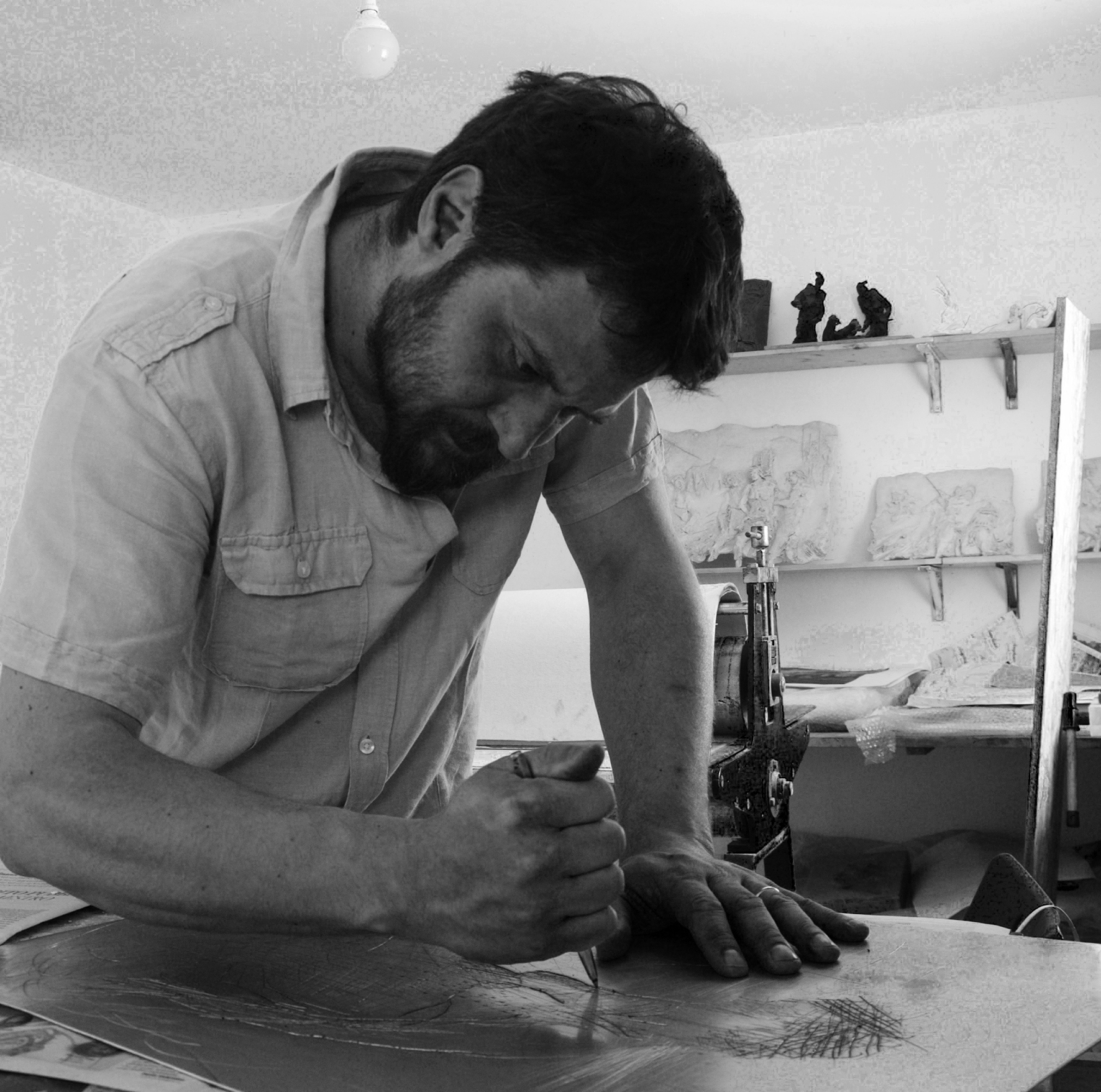